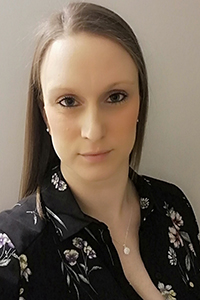 Growing up, Cherie was a bit of a tomboy and when she was asked what she wanted to be when she grew up she would say “a footballer”.  She also enjoyed dance.  From four, she took ballet classes, then extended into tap, jazz, street dance, hip-hop, modern and contemporary as she grew older - going on to study dance at college, and then again at university. The highlights of her performing years were on stage at Her Majesty’s theatre in the West End and when she secured a part in an advert for the BBC supporting a maintenance grant – ironically, playing the role of a student in a science laboratory.

As she had grown up, Cherie’s career plan had changed from footballer to choreographer but she had also nurtured a deep interest in the body and its mechanics, and in injury and repair. When she took a module in Body Maintenance on her dance degree, a passion for learning about health and disease began. Cherie continued to opt for the more science-based modules on her course and started to hope that her degree might become a ‘back-door’ into a career in science.

Cherie managed to secure an entry-level post with the National Blood Service but she was faced with redundancy quite early on and so was back at square one. A few years later, she managed to secure a Medical Laboratory Assistant post at the Princess Alexandra Hospital NHS Trust in Harlow and quickly knew that biomedical science was the career for her.

The people at Princess Alexandra Hospital could see Cherie’s potential and so she was fortunate enough to receive full funding and support from her workplace to study an IBMS-accredited Biomedical Science degree on a part-time day-release basis. She went on to win the university’s Biomedical Science prize for Academic Excellence twice and delivered the vote-of-thanks speech at her graduation.

Cherie then worked her way up to become a HCPC registered Biomedical Scientist and is now well on her way to completing her IBMS Specialist Portfolio. She is working with the IBMS to promote the profession and has also had her first article published. She also works with a local university to ensure their curriculum meets the needs of aspiring Biomedical Scientists, while also mentoring and providing guest lectures.

Whilst she is multi-skilled in the microbiology laboratory, Cherie has a particular passion for Serology / Virology and loves that there are infinite clinical scenarios and that the opportunity for laboratory learning knows no bounds. She embraces that every day is different, and enjoys learning the clinical aspects of how the results she has produced contribute to patient management.