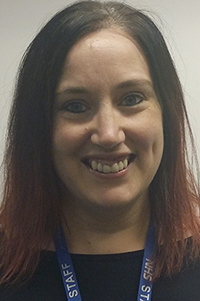 Jo’s love of medicine, anatomy and dissection started in her childhood. At home there was a big chest freezer and her dad would bring back meat and game which had to be ‘cut up’ before being stored. She was fascinated and always asked to help. Funnily enough, she soon realised that she didn’t want to eat these ‘specimens’ and has been vegetarian since her teenage years.

Jo was mostly interested in science and art – subjects that she thought were at opposite ends of the spectrum but has since discovered are often closely associated. She decided to choose science over art at college because she already knew she wanted to work in medicine; she just didn’t know exactly what she wanted to do.

Jo was a really shy teenager and although she wanted to go to University she didn’t want to move away from home. At a science degree courses open day at the University of Portsmouth, an enthusiastic histology lecturer, unbeknown to both of them, changed the course of her life.

Three years later, Jo graduated with a Biomedical Science degree and began working as a trainee biomedical scientist within the histopathology laboratory at Southampton General Hospital. Over the next few years she became a HCPC registered Biomedical Scientist, completed a part-time Masters degree, gained a senior post and a post-graduate management qualification, but most importantly began her specimen dissection career. She knew that she wanted to pursue a clinical pathway and didn’t want to be a manager and so this was the perfect route forward.

In 2009, she passed the IBMS Diploma of Expert Practice in Histological Dissection and soon began to review the cases she was dissecting. She had found her passion! This soon led to reporting the cases under the supervision of consultant histopathologists. At the same time, she began a Professional Doctorate in Health Science, back at the University of Portsmouth.

In 2012, Jo was at a regional Healthcare Science meeting where the Chief Scientific Officer referred to a new ‘histopathology reporting pilot for biomedical scientists’.  She contacted the Royal College of Pathologists (RCPath) and expressed her interest in joining the pilot scheme. She was successful in her application and again, her life changed forever.

In 2017, Jo completed training in gastrointestinal histopathology reporting and is now a member of the gastrointestinal team at Southampton. She is proud to work with the IBMS and the RCPath, helping to run, support and develop the dissection and reporting qualifications - encouraging others to follow in her footsteps and hopefully helping to develop a histopathology workforce fit for the future NHS.

Thirty years on, she’s still the girl with a passion for science and the arts.  She gets to do the science in her professional life and, when not working, can be found at the theatre, enjoying the pure escapism of the West End musicals.