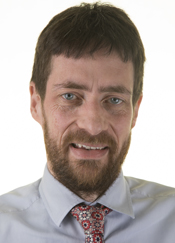 David has been recognised as one of the most powerful advocates for pathology in the global community by The Pathologist magazine, featuring in their Power List top 100 every year since 2018.

As Head of Pathology at NHS England, David was responsible for leading the laboratory response to COVID-19, managing the technology deployment, funding and workforce. He was also tasked with ensuring all capacity requirements were met, advising ministers by providing policy and strategic direction, and helping the government to achieve their goal of delivering 100,000 COVID-19 tests per day in April 2020.

In recognition of his COVID-19 response work and for transforming England’s pathology services, the Royal College of Pathologists (RCPath) awarded him an Honorary Fellowship in 2020 and Anglia Ruskin University presented him with the Alumni Frontline Service Award in 2021.

After completing IBMS accredited BSc and MSc Biomedical Science courses at Anglia Ruskin, David trained at Addenbrooke's Hospital in Cambridge where he qualified as a Biomedical Scientist in December 2000. He then undertook a number of laboratory management roles as well as lecturing in Biomedical Science. He became the first person to hold the post of Lead Healthcare Scientist at Great Ormond Street Hospital, which saw him in charge of their entire healthcare science workforce. Later, David became Director of Operations at Viapath, one of the UK’s largest networked pathology services, covering King's College Hospital and Guy’s and St Thomas’ Hospitals.

David served as an IBMS Council Member for the London Region in 2015, where he served for six years following two elections. In 2020, he was elected as the Chair of the Membership and Marketing Committee.

David has also represented the IBMS on The National Institute for Health and Care Excellence (NICE) diagnostic advisory panels and various national forums, including an observer on the RCPath Council and in the Parliamentary and Science committee.