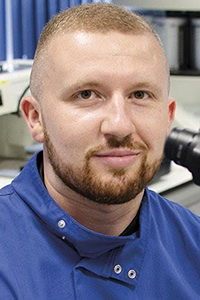 As a boy, Danny was most at home playing football and didn’t do very well in his GCSEs. Instead of going to college to do A-Levels, he decided to do an apprenticeship in business and administration. His work placement was at a doctor’s surgery on the reception desk where he worked for three years before going back to college to re-take his GCSEs and completing an access to higher education diploma in healthcare sciences. Inspired by the junior doctors and student nurses who had come through the surgery on their work placements, he decided to become the first person in his family to go to university and went on to study adult nursing.

After spending two years training to be a nurse, Danny had a ten week placement in a haematology ward and became fascinated by the specialism, particularly cancers of the blood, and decided instead to pursue a career in biomedical science. Despite going back to college, Danny hadn’t met the entry criteria for a biomedical science programme but thanks to his experience in nursing and primary care he managed to get a place on a course at the University of Salford through clearing.

To support his studies, Danny stayed on working in primary care – half the week in work, half the week at university. He progressed from being a receptionist into a clinical governance role – something he enjoyed and took seriously. He sat on his local authority’s out-of-hours primary care council and supported a number of local GP surgeries through their Care Quality Commission (CQC) inspections.

Danny was a student rep for his cohort, president of the Biomedical Science Careers Group and sat on the committee of the university’s Medicine Society and Biomedicine Society. His work with these groups was recognised by the IBMS and he was awarded a sponsored membership for the duration of his studies.

Danny’s placement year in haematology at Manchester Royal Infirmary was full time and unpaid so he had to work at the weekend to earn money. Times were tough but he managed to complete his IBMS Registration Portfolio and achieve his Certificate of Competence so that he would be able to register with the HCPC as a Biomedical Scientist upon his graduation.

He went on to achieve a first-class degree and won an Exceptional Performance on a Biomedicine Programme Prize and a Salford Student Success Gold Award. Most importantly, he managed to get a job as a biomedical scientist in blood sciences immediately after leaving university (and even had to take a day of annual leave to attend his graduation). Soon after, he successfully interviewed for a specialist biomedical scientist post in haematology and transfusion – and started working on the cases that had fascinated most him at the outset.

Having achieved his career goals, Danny now takes time to promote the good work of the profession in collaboration with the IBMS and recently took over the @NHS Twitter handle for the week. He is also a career mentor at Lancaster University and University of Salford and goes back to speak to the students about careers in biomedical science. You can also find him in the stands at Old Trafford on occasion.